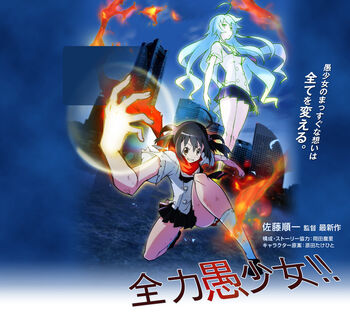 Amane Todoroki is an honest and slightly foolish girl whose catchphrase is “Even if someone asks me, 'Can you really do that?,' I don't really know. But I want to believe! After all, nothing will start if I don't believe!” She is part of a performance team called "Nought," and she has ISH — "Incomprehensible Skill of Humans-beings," the power to turn what is imagined into reality. One night when Nought is performing in front of a small crowd, a girl suddenly appears before Amane! The masked girl with a cold smile is Aya, the popular genius magician in the group "I.A.M.," and, like Amane, Aya also has ISH! What is in store for Amane?

Retrieved from "https://amazing-twins.fandom.com/wiki/Amazing_Twins?oldid=4032"
Community content is available under CC-BY-SA unless otherwise noted.